Let me be clear on this issue: Just because you complete RDAP does not entitle you to time off!

This is a great misconception that people seem to have, both in and outside of federal prison.

The BOP has NO mandate to lessen your sentence by ANY amount of time.

There are extremely few options for sentence reduction within the BOP, and RDAP is the most well-known.

Aside from the 15%  reduction for good time, which means no behavioral infarctions. There is a program called RDAP. RDAP can help to reduce the length of your sentence by typically a year to a year and a half including the additional halfway house time. How soon you are able to get into RDAP is a matter of how long of a sentence you have.

Inmates are eager to participate in the RDAP program because of the potential 18-month or so sentence reduction that they may earn when completing it.

RDAP stands for Residential Drug Abuse Program. Just remember, there is no quid pro quo. The BOP is not mandated to do this.

Unfortunately, many people are unaware of the Residential Drug Abuse Program––RDAP––until they have finished their pre-sentence inquiry or have surrendered to jail. People recognize by then that initial comments made during the Presentence Investigation procedure may permanently prevent them from participating in RDAP. 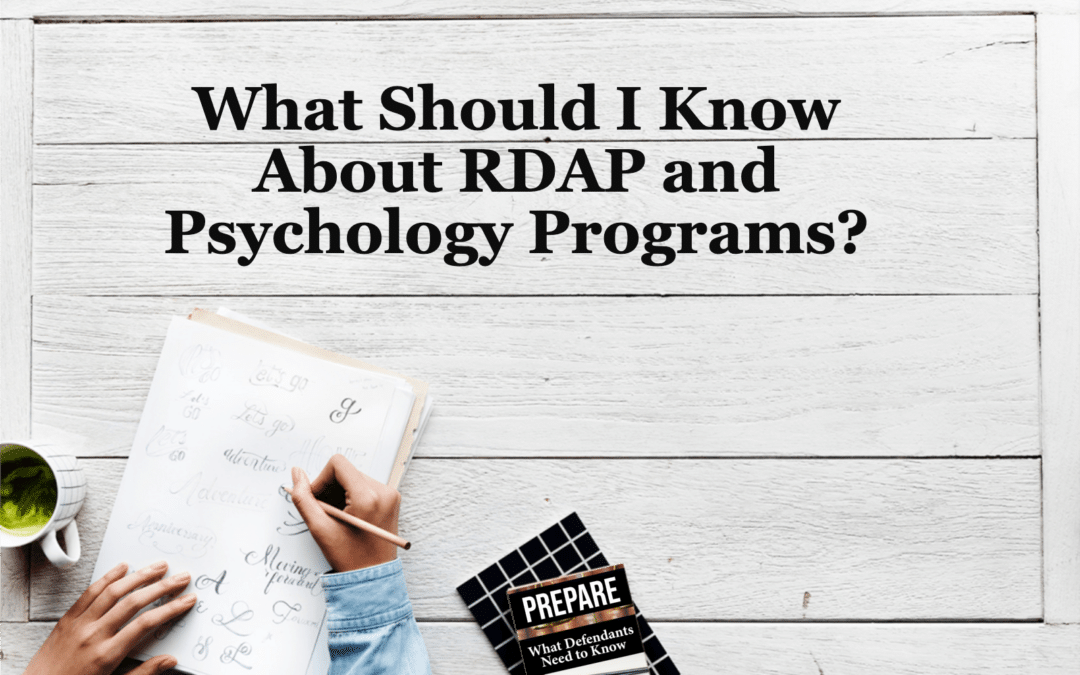 RDAP, like many other aspects of federal prison, is riddled with myths and misunderstandings. First and foremost, entry to the program is simple. There are many people out there who try to make it more complicated to enroll than it really is.

Your Pre-sentence Report aka PSR must demonstrate alcohol or drug misuse one year previous to your indictment to be eligible for RDAP. It is critical that you notify the probation officer conducting your PSI of this information. You will not be eligible for RDAP if your substance misuse is not indicated in your PSR. That’s the bottom line, there is no way around it.

Your not going to be able to talk the BOP into enrolling you, so forget about it.

Most criminal defense attorneys are unaware of this information, so take action on your own side and don’t assume your attorney knows everything there is to know about RDAP and how to qualify for it. Many know what they were trained in, the Law. They are not trained in how the BOP operates most of the time.

During your PSI, you will have a “interview” for RDAP. But you wont know it. This is an illustration of why it’s critical to bring your own story to the PSI. “Substance Abuse” is one of the parts of your personal narrative, which is a topic for another video and critical to have before your sentenced. Your substance abuse from the year before your indictment must be clearly indicated in this area, with documentation.

People who were ashamed of their substance abuse background are incarcerated in federal prisons. When authorities inquired about their history of substance abouse, the individuals attempted to downplay their exposure–or they flatly denied having a problem. They may claim that they did not divulge their past because they feared it would make them appear untrustworthy.

It’s a logical concern, given how many people who abuse drugs are viewed by society as a whole, but you need to remember, this is not about what society will think of you, it’s about you being able to qualify for a program that will quite possible shave a year or more off of your sentence. Be honest with your answers, don’t try to cover up your substance abuse issues, or downplay them in anyway.

We have helped people who were not sure if RDAP was right for them figure this out before hand in the past. We can assist individuals in comprehending the benefits and drawbacks. The majority of our clients understand that the fundamental benefit of the RDAP program is that it allows them to address their alcoholism or drug addiction issues while they are incarcerated. They may also be released early as a result of the administrative advantage.

Unfortunately, many lawyers wait until it’s too late to assist their clients in understanding the benefits of RDAP, if the lawyer brings this issue up at all.

Many people are interested in learning more about the Residential Drug Abuse Program since it is the sole way for people to work toward finishing their sentences sooner. They recognize that persons with major drug misuse issues aren’t the only ones who engage or profit as they learn more.

If you want to reduce your federal prison term by up to 18 months, you owe it to yourself and your family to learn everything you can about the RDAP and see if you qualify.

Be truthful, seriously, I cannot stress this enough

No federal prison consultant worth his/her salt is going to tell you to lie!

Seriously, doing this has sent federal prison consultants to prison in the past!

Please be open and honest about your drug or alcohol usage. If your lawyer tells you not to reveal your substance misuse because it would make you seem bad in front of the judge, he or she is doing you a disservice and may result in you serving a lengthier term. So many people  I’ve met are heartbroken because they don’t qualify for RDAP because their attorneys advised them to keep their substance addiction to a minimum.