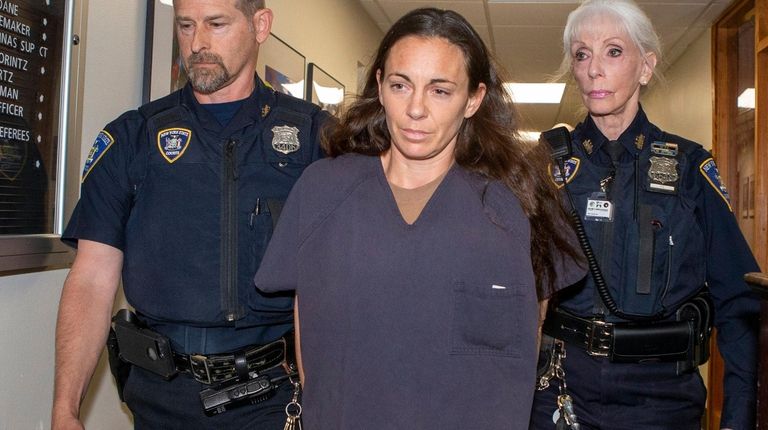 Valerie Cincinelli, the former NYPD officer convicted of delaying a grand jury inquiry into a plot to hire a hitman to kill her divorced husband, will spend her sentence in a Connecticut jail, according to a federal court.
According to court papers, Cincinelli penned a letter to the judge complaining about her impending relocation to Kentucky.

According to the Federal Bureau of Prisons’ online prisoner locator, Cincinelli, who was sentenced to 48 months in prison last year after pleading guilty to a single charge of obstruction of justice, is presently being housed at the Metropolitan Detention Center in Brooklyn.

“My motive for contacting you is to implore you to kindly persuade the BOP to rethink my assignment [to the prison she was designated to],” Cincinelli wrote to U.S.

District Judge Joanna Seybert in a handwritten letter on Jan. 4.

“I may be stuck here several months awaiting a transfer to Kentucky and I would lose out on my opportunity for work release and programs if I stay here in Brooklyn.” Well, we certainly wouldn’t want that, would we?

Cincinelli told the judge that she had been designated to a federal prison in Lexington, Kentucky, and said “severe weather” has “over taken that state,” referring to the Dec. 10 tornado that killed 58 people and caused catastrophic damage to several towns in the western part of the state.

“Their government recently declared a state of emergency due to the death toll from the tornados and the damaged infrastructure,” Cincinelli wrote.
Seybert suggested to the Bureau of Prisons on Thursday that Cincinelli be placed in the Federal Correctional Institution in Danbury in response to Cincinelli’s letter.

After Cincinelli’s sentencing, Seybert had already requested that the BOP send her to Danbury.

Prison designation information is not released until an offender arrives at the institution, according to BOP spokesperson Kristie Breshears.

Breshears added that the bureau “routinely receives judicial recommendations and weighs a number of factors regarding designation to a facility.” She stated that the bureau is ultimately in charge of determining where a prisoner will serve his or her sentence.

Because to the recent COVID-19 surge and tornado damage, Cincinelli’s transfer from MDC to the Kentucky jail has been postponed, according to his Manhattan-based attorney James Kousouros. Cincinelli just tested positive for coronavirus, he said.

“With relation to the covid epidemic, the conditions at the MDC are extremely intolerable for female convicts,” Kousouros stated. “They are not divided as they would be in a dormitory, and the majority of women, including Ms. Cincinelli, have caught COVID during the recent spike.”

Prosecutors say Cincinelli, a 12-year NYPD veteran from Oceanside, conspired to kill her divorced husband, Isaiah Carvalho, because she didn’t want to split their pension. In addition, the couple was going through a divorce and a custody struggle for their kid. Prosecutors also claim she planned to kill her ex-13-year-old boyfriend’s daughter because she believed he was lavishing too much money on her.

As part of a plea agreement, prosecutors dismissed two murder-for-hire charges against Cincinelli. Meanwhile, people get 30 years for non-violent crimes and get sent to U.S. Penetenturies that have killings on a regular basis, and they get no say in where they go, or how.